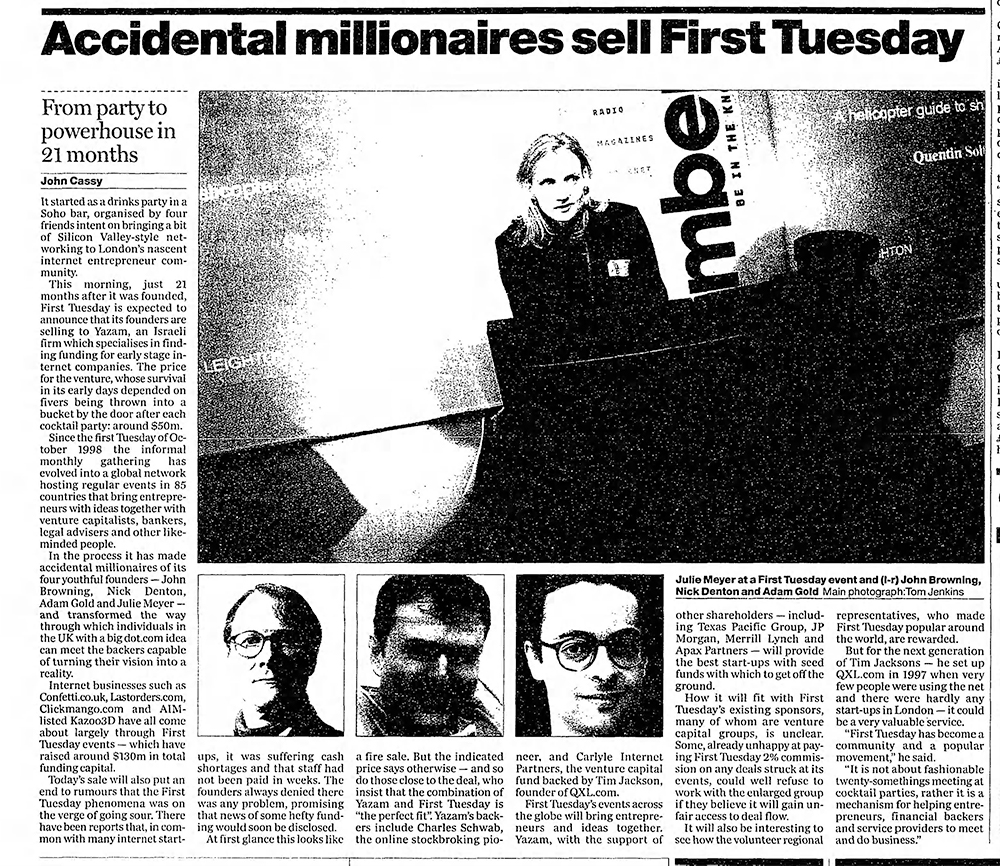 First Tuesday has become a community and a popular movement... It is not about fashionable twenty-somethings meeting at cocktail parties, rather it is a mechanism for helping entrepreneurs, financial backers and service providers to meet and do business. [GUARDIAN]

It started as a drinks party in a Soho bar, organised by four friends intent on bringing a bit of Silicon Valley-style networking to London’s nascent internet entrepreneur community.

This morning, just 21 months after it was founded, First Tuesday is expected to announce that its founders are selling to Yazam, an Israeli firm which specialises in finding funding for early stage internet companies. The price for the venture, whose survival in its early days depended on fivers being thrown into a bucket by the door after each cocktail party: around $50m.

Since the first Tuesday of October 1998 the informal monthly gathering has evolved into a global network hosting regular events in 85 countries that bring entrepreneurs with ideas together with venture capitalists, bankers, legal advisers and other like-minded people.

In the process it has made accidental millionaires of its four youthful founders – John Browning, Nick Denton, Adam Gold and Julie Meyer -and transformed the way through which individuals in the UK with a big dot.com idea can meet the backers capable of turning their vision into a reality.

Internet businesses such as Confetti.co.uk, Lastorders.com, Clickmango.com and AIM-listed Kazoo3D have all come about largely through First Tuesday events – which have raised around $130m in total funding capital.

Today’s sale will also put an end to rumours that the First Tuesday phenomena was on the verge of going sour. There have been reports that, in common with many internet start-ups, it was suffering cash shortages and that staff had not been paid in weeks. The founders always denied there was any problem, promising that news of some hefty funding would soon be disclosed.

At first glance this looks like a fire sale. But the indicated price says otherwise – and so do those close to the deal, who insist that the combination of Yazam and First Tuesday is “the perfect fit”. Yazam’s backers include Charles Schwab, the online stockbroking pio neer, and Carlyle Internet Partners, the venture capital fund backed by Tim Jackson, founder of QXL.com.

First Tuesday’s events across the globe will bring entrepreneurs and ideas together. Yazam, with the support of other shareholders – including Texas Pacific Group, JP Morgan, Merrill Lynch and Apax Partners – will provide the best start-ups with seed funds with which to get off the ground.

How it will fit with First Tuesday’s existing sponsors, many of whom are venture capital groups, is unclear. Some, already unhappy at paying First Tuesday 2% commission on any deals struck at its events, could well refuse to work with the enlarged group if they believe it will gain unfair access to deal flow.

It will also be interesting to see how the volunteer regional representatives, who made First Tuesday popular around the world, are rewarded.

But for the next generation of Tim Jacksons – he set up QXL.com in 1997 when very few people were using the net and there were hardly any start-ups in London – it could be a very valuable service.

“First Tuesday has become a community and a popular movement,” he said.

“It is not about fashionable twenty-somethings meeting at cocktail parties, rather it is a mechanism for helping entrepreneurs, financial backers and service providers to meet and do business.”