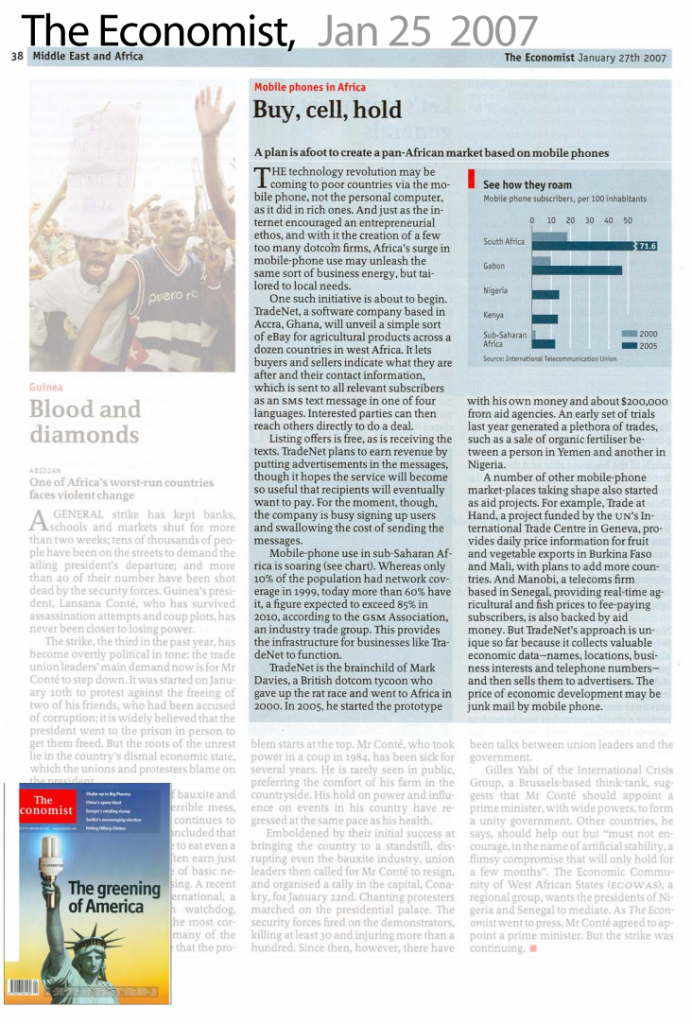 TradeNet will unveil a simple sort of eBay for agricultural products across a dozen countries in west Africa. It lets buyers and sellers indicate what they are after and their contact information... [CNN]

THE technology revolution may be coming to poor countries via the mobile phone, not the personal computer, as it did in rich ones. And just as the internet encouraged an entrepreneurial ethos, and with it the creation of a few too many dotcom firms, Africa’s surge in mobile-phone use may unleash the same sort of business energy, but tailored to local needs.

One such initiative is about to begin. TradeNet, a software company based in Accra, Ghana, will unveil a simple sort of eBay for agricultural products across a dozen countries in west Africa. It lets buyers and sellers indicate what they are after and their contact information, which is sent to all relevant subscribers as an SMS text message in one of four languages.

Interested parties can then reach others directly to do a deal.Listing offers is free, as is receiving the texts. TradeNet plans to earn revenue by putting advertisements in the messages, though it hopes the service will become so useful that recipients will eventually want to pay. For the moment, though, the company is busy signing up users and swallowing the cost of sending the messages.

Mobile-phone use in sub-Saharan Africa is soaring (see chart). Whereas only 10% of the population had network coverage in 1999, today more than 60% have it, a figure expected to exceed 85% in 2010, according to the GSM Association, an industry trade group. This provides the infrastructure for businesses like TradeNet to function.
TradeNet is the brainchild of Mark Davies, a British dotcom tycoon who gave up the rat race and went to Africa in 2000. In 2005, he started the prototype for TradeNet using around $600,000 of his own money and about $200,000 from aid agencies. An early set of trials last year generated a plethora of trades, such as a sale of organic fertiliser between a person in Yemen and another in Nigeria.

A number of other mobile-phone market-places taking shape also started as aid projects. For example, Trade at Hand, a project funded by the UN’s International Trade Centre in Geneva, provides daily price information for fruit and vegetable exports in Burkina Faso and Mali, with plans to add more countries. And Manobi, a telecoms firmbased in Senegal, providing real-time agricultural and fish prices to fee-paying subscribers, is also backed by aid money. But TradeNet’s approach is unique so far because it collects valuable economic data—names, locations, business interests and telephone numbers—and then sells them to advertisers. The price of economic development may be junk mail by mobile phone.