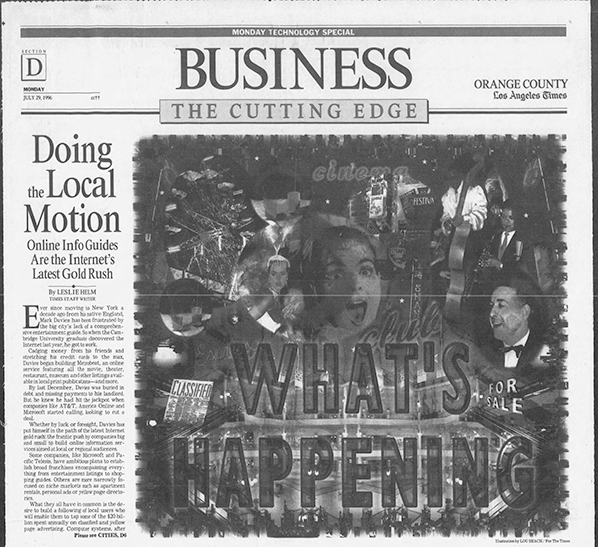 when the Cambridge University graduate discovered the Internet last year, he got to work. Cadging money from his friends and stretching his credit cards to the max, Davies began building Metrobeat... [LATIMES]

Ever since moving to New York a decade ago from his native England, Mark Davies has been frustrated by the big city’s lack of a comprehensive entertainment guide. So when the Cambridge University graduate discovered the Internet last year, he got to work.

Cadging money from his friends and stretching his credit cards to the max, Davies began building Metrobeat, an online service featuring all the movie, theater, restaurant, museum and other listings available in local print publications-and more.

By last December, Davies was buried in debt and missing payments to his landlord. But he knew he had hit the jackpot when companies like AT&T, America Online and Microsoft started calling, looking to cut a deal.

Whether by luck or foresight, Davies has put himself in the path of the latest Internet gold rush: the frantic push by companies big and small to build online information services aimed at local or regional audiences,

Some companies, like Microsoft and Pacific Telesis, have ambitious plans to establish broad franchises encompassing everything from entertainment listings to shopping guides. Others are more narrowly focused on niche markets such as apartment rentals, personal ads or yellow page directories.

What they all have in common is the desire to build a following of local users who will enable them to tap some of the $20 billion spent annually on classified and yellow page advertising. Computer systems, after all, are in principle a perfect medium for listings of every stripe: They can store a lot of information, sort it efficiently and make it readily accessible through keyword searches.

look at the classifieds as the golden goose.”

It could take quite a while before any of these upstarts develop into serious rivals to the venerable printed classifieds of the Sunday paper or the ubiquitous yellow pages of local telephone companies. At the moment, most online services remain clumsy and sparse in content and advertisers still spend only minuscule sums online.

And with locally based services requiring start-up investments as high as that of a national or international service, while targeting a much narrower audience, observers say many of the dozens of new services will fail before any emerge triumphant.

“The Internet is such a jumble, nobody has a good grasp on it.” acknowledges J.B. Pritzker, president of his wealthy family’s New World Equity Fund, a venture capital fund that has invested in AdOne, an online classified service. “Competition is fierce. Picking your niche is vital.”

Eventually, though, computerized listings packed with thousands of pages of pictures, maps, menus and text could emerge as a major force in the way people hunt for jobs, look for apartment or plan an evening on the town.

Microsoft is rumored to be betting anywhere from $200 million to $500 million that such a day is near. The software giant plans to build local entertainment and shopping guides with extensive listings and editorial information in major metropolitan areas nationwide.

The business plan for the service, code-named “Cityscape,” was originally coauthored by Melinda French, wife of Microsoft Chairman Bill Gates. And it’s now staffing up as fast as it can find the people, hiring not only at the Redmond, Wash., headquarters but also in San Diego, San Francisco, Seattle and New York — the cities where it hopes to launch late this year or early next.

“People tend to build communities around geographic localities and specific things they are interested in,” explains Richard Tait, head of marketing and business development for Cityscape.

Others hope to win local followings by offering different kinds of information.

“We are creating a lot of information that didn’t exist before,” says Conn, the 34-year-old CitySearch chief executive. He says newspapers do a poor job of collecting Local information, such as sports scores of community teams.

The company, which recently raised $10 million in venture financing from AT&T Ventures, Goldman Sachs and others, plans to add services in 30 more cities, including Pasadena, by the end of next year. To help finance its expansion, the company may also sell equity shares in its regional operations to local newspaper or television partners.

To jump-start its New York operation, CitySearch purchased Davies’ Metrobeat, which will soon be reborn as a CitySearch site complete with community and shopping information.

Other start-ups are trying to take advantage of the Internet’s strength at building vertical niche markets to win advertisers.

San Francisco-based BigBook is taking on the phone companies on their own turf with a national yellow pages service. East Coast conglomerate CUC International is offering an online rental service, while AdOne is tying up with smaller newspapers in an effort to develop a national classified ad service online.

Tele-Publishing of Boston, the company that handles voice personals for hundreds of newspapers, in September will launch an online personals advertising service in alliance with newspapers featuring voicemail, anonymous e-mail, personal Web pages and a matchmaking service.

Convincing advertisers such as retailers that the online services can draw new customers will not be an easy task, however. And many newspaper editors also question whether technology companies can really deliver on their promises of gathering huge amounts of useful, reliable, up-to-date local information.

“They are going to find out a few things,” says Bob Ingle, vice president for new media at the Knight Ridder newspaper chain.

CitySearch wants to report little league sports scores? “Talk to any sports editor in a metro area,” says Ingle. “They throw up their hands in frustration. The coaches will head for the bar and forget to call you.”

And how about broader regional coverage? “They can’t possibly do that in as many cities as they say,” says Gina Maniscalco, executive director of Globe Electronic Publishing. Globe has developed its own extensive Web site that takes advantage of content from the Boston Globe and a number of popular local magazines. “Users want information that they know will have integrity, compelling information they can trust.”

The technology companies are trying to overcome their weakness in content by allying themselves with print publishers, but in many cases, suspicious newspapers are not praying along.

When Microsoft showed up at a conference of alternative weeklies earlier this summer in hopes of finding partners, it got the cold shoulder.

“The feeling is that they aren’t working in our interests,” says Linda Nelson, vice president of new media at Stern Publishing, which publishes the Village Voice in New York, the L.A. Weekly and the Orange County Weekly.

One newspaper publisher recalls a meeting, ostensibly set up to discuss a possible partnership, in which a Microsoft representative demanded to know what arrangements the publisher had with other online companies. Other publishers report that Microsoft has threatened to hire away reporters from newspapers that don’t cooperate.

Microsoft isn’t the only one creating enemies. One weekly publisher says CitySearch has developed a reputation for “strip-mining” local papers by targeting specific companies that advertise in their publications.

Dean Singleton, owner of the media group that includes the Denver Post and the Oakland Tribune, has joined forces with Microsoft, but so far he’s almost alone.

“Microsoft is going to want to put their name on everything and marginalize your name brand,” says Braxton Jarrett, head of marketing for the online versions of Phoenix-based New Times, the alternative weekly chain that recently purchased the L.A. Village View. Jarrett says New Times will soon announce an online partnership with another company.

But the company plans to put the service on the Web and add other cities with the kind of user-friendly forums that have made its national service popular.

“We want to make people comfortable talking to each other and make the online service part of their day,” says Bob Smith, vice president of the Santa Monica-based company. The Washington service provided valuable information on school closings and traffic reports during a blizzard last winter, Smith says.

Many smaller newspapers are partnering with New York-based AdOne to get their classifieds online. AdOne has signed deals with 200 publications under which it covers all the costs of putting classifieds online, in exchange for a roughly 50% share of the additional fee newspapers charge advertisers.

“There are 300 sites for classified ads, but none of them have any content,” says Steve Brotman, who sold display ads and worked for Andersen Consulting before starting AdOne.

But most major metropolitan newspapers would rather go it alone. In Los Angeles, San Francisco and Boston, leading dailies have developed extensive World Wide Web sites that include news, entertainment guides and classified sections.

And in an effort to defend the job-listings franchises, about 100 newspapers, including the Los Angeles Times and the New York Times, have banded together to contribute their content to a single service called CareerPath (http://www.careerpath.com ), a national job listings service.

But while the content of the newspaper services is rich — with features such as archives of film reviews and full-length newspaper stories — critics say much of that material isn’t fit for an online medium, where users seem to prefer shorter bits of information and an opportunity to add their own opinions.

And many newspapers, burned by failed technology ventures in the past, are hesitant to spend large sums on developing new information for a medium that is unprofitable and could compete with the print franchise.

Still, many phone companies are moving cautiously ahead. Pacific Telesis, the parent of Pacific Bell, is among the most aggressive. It will soon launch a slick; California-wide electronic yellow pages and shopping guide called At Hand.

The company does have a widely recognized brand name that helped attract 40 advertisers and 15 publishing partners for the mid-August launch. It also made 500,000 phone calls to add information that will make the electronic product substantially more informative than the printed version.

“We are trying to be complimentary to yellow pages and not a substitute,” says Jeff Killeen, chief executive of Pacific Bell Interactive Media.

In the long run, many analysts say, there is no reason that newspapers and phone companies can’t learn to cope with the new environment.

Handled properly, the new medium could even re-energize newspapers. “With newspaper circulation in a long-term decline, this could be a lifesaver,” says Ira Carlin, executive vice president of Worldwide Media at McCann-Erickson Worldwide. He believes newspapers should take advantage of their brand names to build readership online among youth and others who are not regular readers of the paper.

But while the phone companies and newspapers dawdle, Microsoft and its cohorts — though weak in content — are spending heavily to find the right formula for penetrating local markets.

“They are pretty flatfooted sometimes,” says Knight Ridder’s Ingle of companies like Microsoft and Pacific Bell, “but they have enormous, enormous power and resources.”

Here are some of the new ventures that aim to provide community information services, entertainment guides and classified advertising on the Internet.