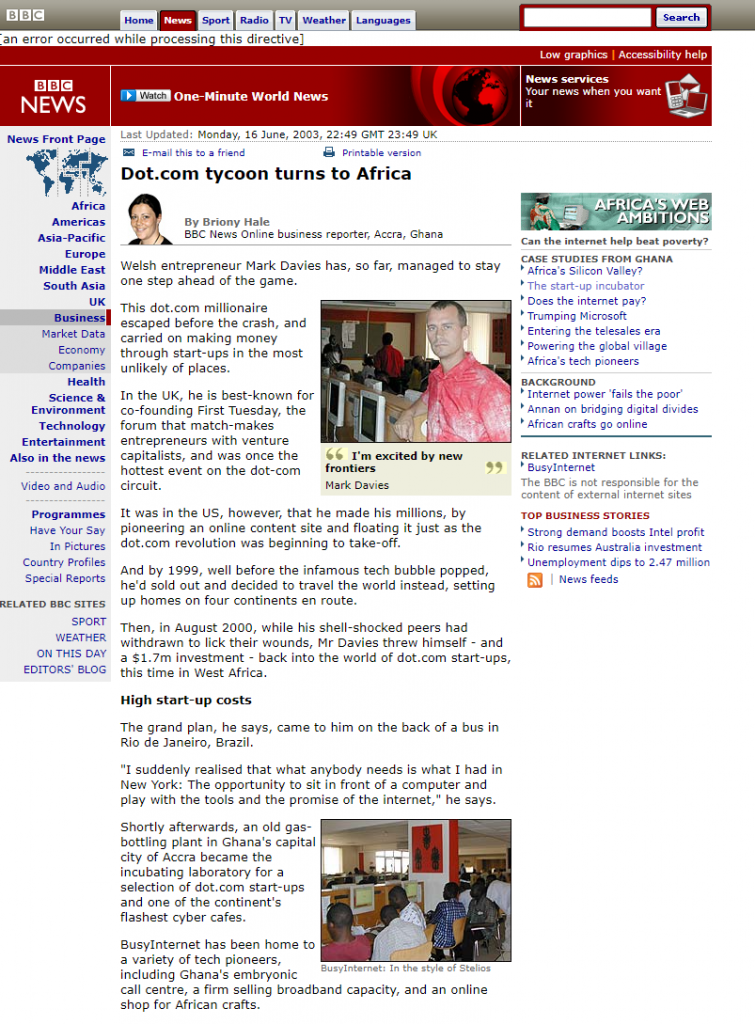 An old gas-bottling plant in Ghana's capital city of Accra became the incubating laboratory for a selection of dot.com start-ups and one of the continent's flashest cyber cafes. [BBC]

Welsh entrepreneur Mark Davies has, so far, managed to stay one step ahead of the game.

This dot.com millionaire escaped before the crash, and carried on making money through start-ups in the most unlikely of places. In the UK, he is best-known for co-founding First Tuesday, the forum that match-makes entrepreneurs with venture capitalists, and was once the hottest event on the dot-com circuit. It was in the US, however, that he made his millions, by pioneering an online content site and floating it just as the dot.com revolution was beginning to take-off. And by 1999, well before the infamous tech bubble popped, he’d sold out and decided to travel the world instead, setting up homes on four continents en route.

Then, in August 2000, while his shell-shocked peers had withdrawn to lick their wounds, Mr Davies threw himself – and a $1.7m investment – back into the world of dot.com start-ups, this time in West Africa.

The grand plan, he says, came to him on the back of a bus in Rio de Janeiro, Brazil. “I suddenly realised that what anybody needs is what I had in New York: The opportunity to sit in front of a computer and play with the tools and the promise of the internet,” he says. Shortly afterwards, an old gas-bottling plant in Ghana’s capital city of Accra became the incubating laboratory for a selection of dot.com start-ups and one of the continent’s flashest cyber cafes.
BusyInternet has been home to a variety of tech pioneers, including Ghana’s embryonic call centre, a firm selling broadband capacity, and an online shop for African crafts.

It’s passive incubation, Mr Davies explains. What the pioneers need is a broadband connection, a $30,000 generator to bridge the all too frequent power cuts, and a secure location from which to hatch their businesses. The initial outlay on a generator, for example, would simply be impossible for many start-ups.

Meanwhile, the internet cafe downstairs, unashamedly modelled on Stelios Haji-Ioannou’s EasyEverything chain, has become one of the coolest places to hang out in downtown Accra. Fashion shows, live music and movies are all part of the in-house entertainment, while less frivolous activities include video conferencing and web design classes. BusyInternet averages about 1,500 visitors a day, who use its 100 flat-screens all through the night. But the most startling part of this unlikely tale is that BusyInternet is profitable, and achieved a positive cashflow within just four months of opening. Ironically, Mr Davies once asked for help from Stelios, whose own chain of internet cafes are now in financial difficulties. There has been a more sensible approach to generating revenue from Africa’s dot.com start-ups, Mr Davies explains, highlighting the vital ingredient that was sorely missing from the West’s dot.com boom.

There have, however, been a host of different problems to overcome. FBI agents have been amongst BusyInternet’s guests, tracking down previous guests involved in Africa’s notoriously dodgy money-seeking schemes. Government bureaucracy, a poor service industry and limited repair facilities are among the list of complaints frequently voiced by Ghana’s techies.

And while BusyInternet turns in a profit, it has not been as much as hoped for, largely because the satellite link costs 10 times as much as a broadband connection in the UK. And that has scuppered the original plan to open similar technology centres in Senegal, Burkina Faso and beyond.

Mr Davies, in any case, is already looking to new opportunities elsewhere. His current projects include building a software product for African cybercafes and forming a database of all the technology firms in Africa. “I’m excited by new frontiers and the first wave of development, not sticking around to grow a career.” “I’m just the ideas guy,” he says.

Watch out for his next one.