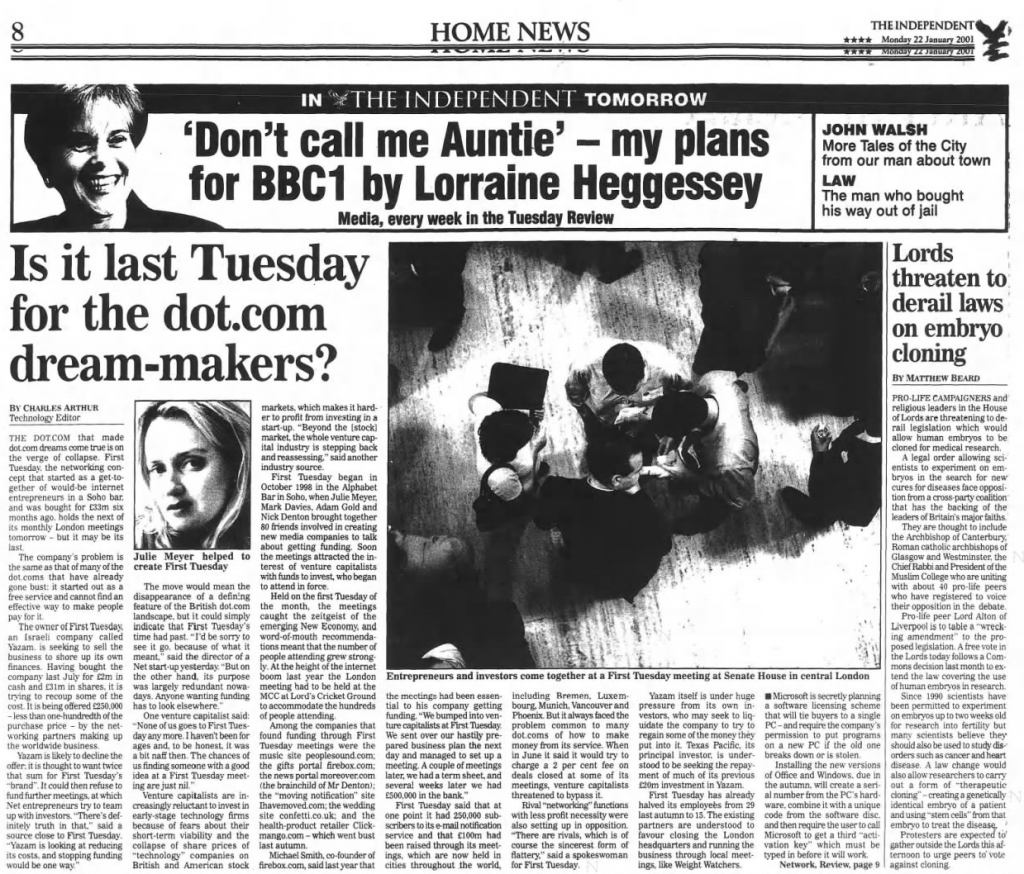 Is it last Tuesday for the dot.com dream-makers?

The dot.com that made dot.com dreams come true is on the verge of collapse. First Tuesday, the networking concept that started as a get-together of would-be internet entrepreneurs in a Soho bar... [THE INDEPENDENT]

The dot.com that made dot.com dreams come true is on the verge of collapse. First Tuesday, the networking concept that started as a get-together of would-be internet entrepreneurs in a Soho bar, and was bought for £33m six months ago, holds the next of its monthly London meetings tomorrow – but it may be its last.

The dot.com that made dot.com dreams come true is on the verge of collapse. First Tuesday, the networking concept that started as a get-together of would-be internet entrepreneurs in a Soho bar, and was bought for £33m six months ago, holds the next of its monthly London meetings tomorrow – but it may be its last.

The company’s problem is the same as that of many of the dot.coms that have already gone bust: it started out as a free service and cannot find an effective way to make people pay for it.

The owner of First Tuesday, an Israeli company called Yazam, is seeking to sell the business to shore up its own finances. Having bought the company last July for £2m in cash and £31m in shares, it is trying to recoup some of the cost. It is being offered £250,000 – less than one-hundredth of the purchase price – by the networking partners making up the worldwide business.

Yazam is likely to decline the offer; it is thought to want twice that sum for First Tuesday’s “brand”. It could then refuse to fund further meetings, at which Net entrepreneurs try to team up with investors. “There’s definitely truth in that,” said a source close to First Tuesday. “Yazam is looking at reducing its costs, and stopping funding would be one way.”

The move would mean the disappearance of a defining feature of the British dot.com landscape, but it could simply indicate that First Tuesday’s time had past. “I’d be sorry to see it go, because of what it meant,” said the director of a Net start-up yesterday. “But on the other hand, its purpose was largely redundant nowadays. Anyone wanting funding has to look elsewhere.”

One venture capitalist said: “None of us goes to First Tuesday any more. I haven’t been for ages and, to be honest, it was a bit naff then. The chances of us finding someone with a good idea at a First Tuesday meeting are just nil.”

Venture capitalists are increasingly reluctant to invest in early-stage technology firms because of fears about their short-term viability and the collapse of share prices of “technology” companies on British and American stock markets, which makes it harder to profit from investing in a start-up. “Beyond the [stock] market, the whole venture capital industry is stepping back and reassessing,” said another industry source.

First Tuesday began in October 1998 in the Alphabet Bar in Soho, when Julie Meyer, Mark Davies, Adam Gold and Nick Denton brought together 80 friends involved in creating new media companies to talk about getting funding. Soon the meetings attracted the interest of venture capitalists with funds to invest, who began to attend in force.

Held on the first Tuesday of the month, the meetings caught the zeitgeist of the emerging New Economy, and word-of-mouth recommendations meant that the number of people attending grew strongly. At the height of the internet boom last year the London meeting had to be held at the MCC at Lord’s Cricket Ground to accommodate the hundreds of people attending.

Among the companies that found funding through First Tuesday meetings were the music site peoplesound.com; the gifts portal firebox.com; the news portal moreover.com (the brainchild of Mr Denton); the “moving notification” site Ihavemoved.com; the wedding site confetti.co.uk; and the health-product retailer Clickmango.com – which went bust last autumn.

Michael Smith, co-founder of firebox.com, said last year that the meetings had been essential to his company getting funding. “We bumped into venture capitalists at First Tuesday. We sent over our hastily prepared business plan the next day and managed to set up a meeting. A couple of meetings later, we had a term sheet, and several weeks later we had £500,000 in the bank.”

First Tuesday said that at one point it had 250,000 subscribers to its e-mail notification service and that £100m had been raised through its meetings, which are now held in cities throughout the world, including Bremen, Luxembourg, Munich, Vancouver and Phoenix. But it always faced the problem common to many dot.coms of how to make money from its service. When in June it said it would try to charge a 2 per cent fee on deals closed at some of its meetings, venture capitalists threatened to bypass it.

Rival “networking” functions with less profit necessity were also setting up in opposition. “There are rivals, which is of course the sincerest form of flattery,” said a spokeswoman for First Tuesday.

Yazam itself is under huge pressure from its own investors, who may seek to liquidate the company to try to regain some of the money they put into it. Texas Pacific, its principal investor, is understood to be seeking the repayment of much of its previous £20m investment in Yazam.

First Tuesday has already halved its employees from 29 last autumn to 15. The existing partners are understood to favour closing the London headquarters and running the business through local meetings, like Weight Watchers.

A source close to the company said: “The days of raising seed capital for internet start-ups and taking that company to market inside six months are gone. You would not create First Tuesday in today’s climate.” But another said: “The network is too big to simply shut down. Whatever the state of the stock markets, people in the new economy will still continue to want to gather and exchange ideas.” Next time, though, they may admit it is not a path to riches.
© 2006 Independent News and Media Limited