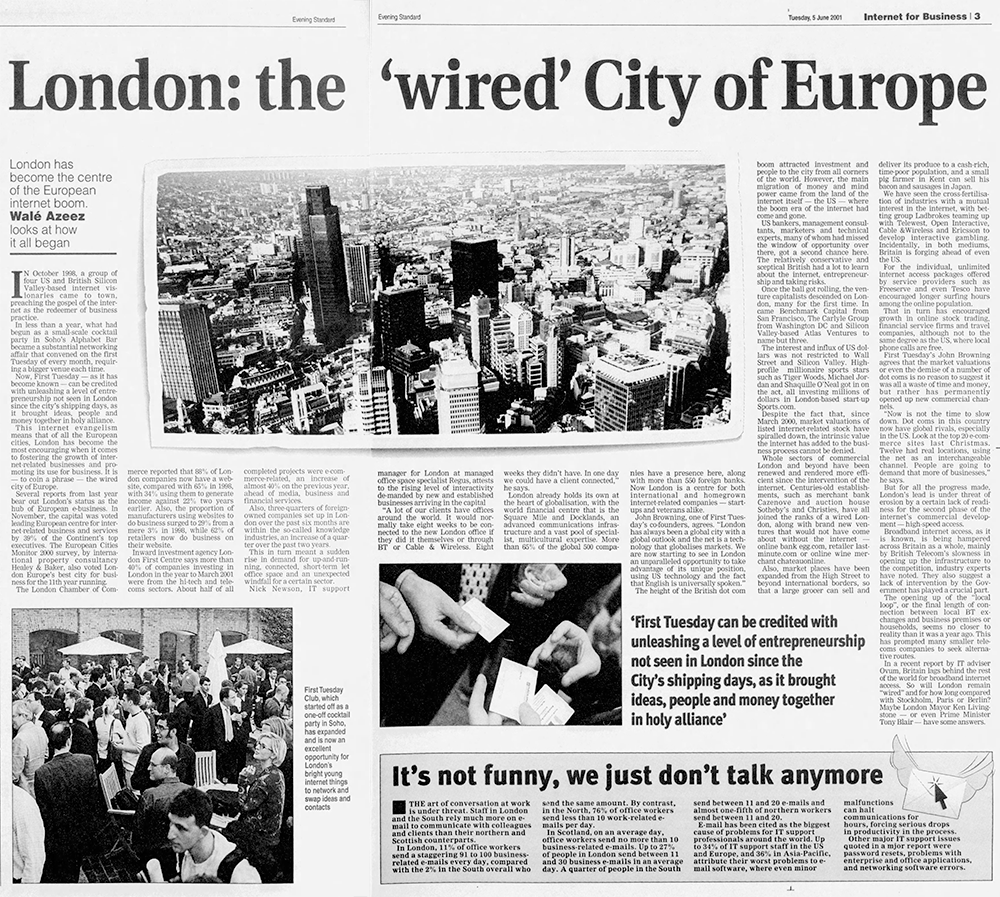 London: the ‘wired’City of Europe

First tuesday can be credited with unleashing a level of entrepreneurship not seen in London since the City's shipping days, as it brought ideas, people and money together in holy alliance [EVENING STANDARD]

In October 1998, a group of four US and British Silicon Valley-based internet visionairies came to town, preaching the gospel of the internet as the redeemer of business practice.

In less than a year, what had begun as a small-scale cocktail party in Soho’s Alphabet Bar became a substantial networking affair that convened on the first Tuesday of every month, requiring a bigger venue each time.

Now, First Tuesday – as it has become known – can be credited with unleashing a level of entre-preneurship not seen in London since the city’s shipping days, as it brought ideas, people and money together in holy alliance.

This internet evangelism means that of all the European cities, London has become the most encouraging when it comes to fostering the growth of internet-related businesses and promoting its use for business. It is – to coin a phrase – the wired city of Europe.

Several reports from last year bear out London’s status as the hub of European e-business. In November, the capital was voted leading European centre for inter-net-related business and services by 39% of the Continent’s top executives. The European Cities Monitor 2000 survey, by international property consultancy Healey & Baker, also voted London Europe’s best city for business for the 11th year running.

The London Chamber of Commerce reported that 88% of London companies now have a website, compared with 65% in 1998 with 34% using them to generate income against 22% two years earlier. Also, the proportion of manufacturers using websites to do business surged to 29% from a mere 3% in 1998, while 62% of retailers now do business on their website.

Inward investment agency London First Centre says more than 40% of companies investing in London in the year to March 2001 were from the hi-tech and telecoms sectors. About half of all completed projects were e-commerce-related, an increase of almost 40% on the previous year, ahead of media, business and financial services.

Also, three-quarters of foreign-owned companies set up in Lon-don over the past sLx months are within the so-called knowledge industries, an increase of a quarter over the past two years.

This in turn meant a sudden rise in demand for up-and-running, connected, short-term let office space and an unexpected windfall for a certain sector.

Nick Newson, IT support manager for London at managed office space specialist Regus, attests to the rising level of interactivity demanded by new and established businesses arriving in the capital.

“A lot of our clients have offices around the world. It would normally take eight weeks to be connected to the new London office if they did it themselves or through BT or Cable & Wireless. Eight weeks they didn’t have. In one day we could have a client connected,” he says.

London already holds its own at the heart of globalisation, with the world financial centre that is the Square Mile and Docklands, an advanced communications infrascture and a vast pool of specialist, multicultural expertise. More than 65% of the global 500 companies have a presence here, along with more than 550 foreign banks. Now London is a centre for both international and homegrown internet-related companies – start-ups and veterans alike.

John Browning, one of First Tuesday’s co-founders, agrees. “London has always been a global city with a global outlook and the net is a technology that globalises markets. We are now starting to see in London an unparalleled opportunity to take adyantage of its unique position, using US technology and the fact that English is universally spoken.”

The height of the British dot com boom attracted investment and people to the city from all comers of the world. However, the main migration of money and mind power came from the land of the internet itself – the US – where the boom era of the internet had come and gone.

US bankers, management consultants, marketers and technical experts, many of whom had missed the window of opportunity over there, got a second chance here. The relatively conservative and sceptical British had a lot to learn about the internet, entrepreneurship and taking risks.

Once the ball got rolling, the venture capitalists descended on London, many for the first time. In came Benchmark Capital from San Francisco, The Carlyle Group from Washington DC and Silicon Valley-based Atlas Ventures to name but three.

The interest and influx of US dollars was not restricted to Wall Street and Silicon Valley. High-profile millionaire sports stars such as Tiger Woods, Michael Jordan and Shaquille O’Neal got in on the act, all investing millions of dollars in London-based start-up Sports.com.

Despite the fact that, since March 2000, market valuations of listed internet-related stock have spiralled down, the intrinsic value the internet has added to the business process cannot be denied.

Whole sectors of commercial London and beyond have been renewed and rendered more efficient since the intervention of the internet. Centuries-old establishments, such as merchant bank Cazenove and auction house Sotheby’s and Christies, have all joined the ranks of a wired London, along with brand new ventures that would not have come about without the internet online bank egg.com, retailer last-minute.com or online wine merchant chateauonline.

Also, market places have been expanded from the High Street to beyond international borders, so that a large grocer can sell and deliver its produce to a cash-rich time-poor population, and a small pig farmer in Kent can sell his bacon and sausages in Japan.

We have seen the cross-fertilisation of industries with a mutual interest in the internet with betting group Ladbrokes teaming up with Telewest, Open Interactive Cable &Wireless and Ericsson t develop interactive gambling. Incidentally, in both mediums Britain is forging ahead of even the US.

For the individual, unlimited internet access packages offered by service providers such as Freeserve and even Tesco have encouraged longer surfing hours among the online population.

That in turn has encouraged growth in online stock trading, financial service firms and travel companies, although not to the same degree as the US, where local phone calls are free.

First Tuesday’s John Browning agrees that the market valuations or even the demise of a number of dot coms is no reason to suggest it was all a waste of time and money, but rather has permanently opened up new commercial channels.

“Now is not the time to slow down. Dot coms in this country now have global rivals, especially in the US. Look at the top 20 e-commerce sites last Christmas. Twelve had real locations, using the net as an interchangeable channel. People are going to demand that more of businesses,” he says.

But for all the progress made London’s lead is under threat of erosion by a certain lack of readiness for the second phase of the internet’s commercial development – high-speed access.

Broadband internet access, as it is known, is being hampered across Britain as a whole, mainly by British Telecom’s slowness in opening up the infrastructure to the competition, industry experts have noted. They also suggest a lack of intervention by the Government has played a crucial part.

The opening up of the “local loop”, or the final length of connection between local BT exchanges and business premises or households, seems no closer to reality than it was a year ago. This has prompted many smaller telecoms companies to seek alternative routes.

In a recent report by IT adviser Ovum, Britain lags behind the rest of the world for broadband internet access. So will London remain “wired” and for how long compared with Stockholm, Paris or Berlin? Maybe London Mayor Ken Livingstone – or even Prime Minister Tony Blair- have some answers.