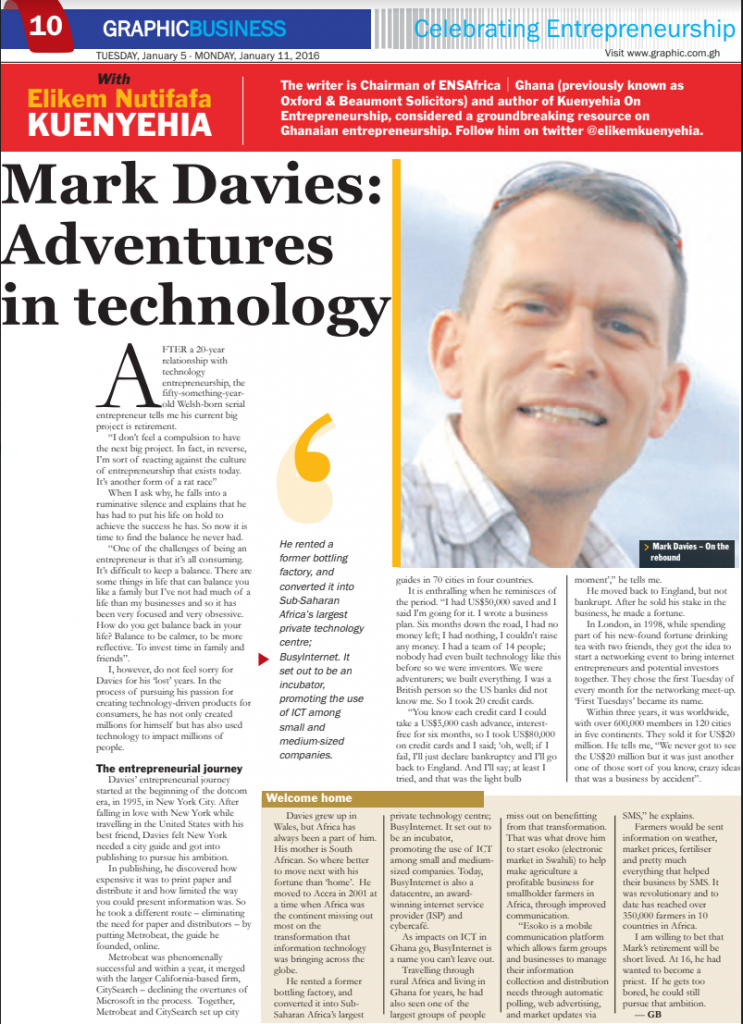 He rented a former bottling factory, and converted it into Sub-Saharan Africa’s largest private technology centre; BusyInternet. It set out to be an incubator, promoting the use of ICT among small and medium-sized companies. [GRAPHIC]

After a 20-year relationship with technology entrepreneurship, the fifty-something-year-old Welsh-born serial entrepreneur tells me his current big project is retirement. “I don’t feel a compulsion to have the next big project. In fact, in reverse, I’m sort of reacting against the culture of entrepreneurship that exists today. It’s another form of a rat race” When I ask why, he falls into a ruminative silence and explains that he has had to put his life on hold to achieve the success he has. So now it is time to find the balance he never had.

“One of the challenges of being an entrepreneur is that it’s all consuming. It’s difficult to keep a balance. There are some things in life that can balance you like a family but I’ve not had much of a life than my businesses and so it has been very focused and very obsessive. How do you get balance back in your life? Balance to be calmer, to be more reflective. To invest time in family and friends”. I, however, do not feel sorry for Davies for his ‘lost’ years. In the process of pursuing his passion for creating technology-driven products for consumers, he has not only created millions for himself but has also used technology to impact millions of people.

The entrepreneurial journey Davies’ entrepreneurial journey started at the beginning of the dotcom era, in 1995, in New York City. After falling in love with New York while travelling in the United States with his best friend, Davies felt New York needed a city guide and got into publishing to pursue his ambition. In publishing, he discovered how expensive it was to print paper and distribute it and how limited the way you could present information was. So he took a different route – eliminating the need for paper and distributors – by putting Metrobeat, the guide he founded, online. Metrobeat was phenomenally successful and within a year, it merged with the larger California-based firm, CitySearch – declining the overtures of Microsoft in the process. Together, Metrobeat and CitySearch set up city guides in 70 cities in four countries.

It is enthralling when he reminisces of the period. “I had US$50,000 saved and I said I’m going for it. I wrote a business plan. Six months down the road, I had no money left; I had nothing, I couldn’t raise any money. I had a team of 14 people; nobody had even built technology like this before so we were inventors. We were adventurers; we built everything. I was a British person so the US banks did not know me. So I took 20 credit cards. “You know each credit card I could take a US$5,000 cash advance, interest-free for six months, so I took US$80,000 on credit cards and I said; ‘oh, well; if I fail, I’ll just declare bankruptcy and I’ll go back to England. And I’ll say; at least I tried, and that was the light bulb moment’,” he tells me.

He moved back to England, but not bankrupt. After he sold his stake in the business, he made a fortune. In London, in 1998, while spending part of his new-found fortune drinking tea with two friends, they got the idea to start a networking event to bring internet entrepreneurs and potential investors together. They chose the first Tuesday of every month for the networking meet-up. ‘First Tuesdays’ became its name. Within three years, it was worldwide, with over 600,000 members in 120 cities in five continents. They sold it for US$20 million. He tells me, “We never got to see the US$20 million but it was just another one of those sort of you know, crazy ideas that was a business by accident”.

Davies grew up in Wales, but Africa has always been a part of him. His mother is South African. So where better to move next with his fortune than ‘home’. He moved to Accra in 2001 at a time when Africa was the continent missing out most on the transformation that information technology was bringing across the globe. He rented a former bottling factory, and converted it into Sub- Saharan Africa’s largest private technology centre; BusyInternet. It set out to be an incubator, promoting the use of ICT among small and medium-sized companies. Today, BusyInternet is also a datacentre, an award- winning internet service provider (ISP) and cybercafé. As impacts on ICT in Ghana go, BusyInternet is a name you can’t leave out. Travelling through rural Africa and living in Ghana for years, he had also seen one of the largest groups of people miss out on benefitting from that transformation. That was what drove him to start esoko (electronic market in Swahili) to help make agriculture a profitable business for smallholder farmers in Africa, through improved communication. “Esoko is a mobile communication platform which allows farm groups and businesses to manage their information collection and distribution needs through automatic polling, web advertising, and market updates via SMS,” he explains. Farmers would be sent information on weather, market prices, fertiliser and pretty much everything that helped their business by SMS. It was revolutionary and to date has reached over 350,000 farmers in 10 countries in Africa. I am willing to bet that Mark’s retirement will be short lived. At 16, he had wanted to become a priest. If he gets too bored, he could still pursue that ambition.