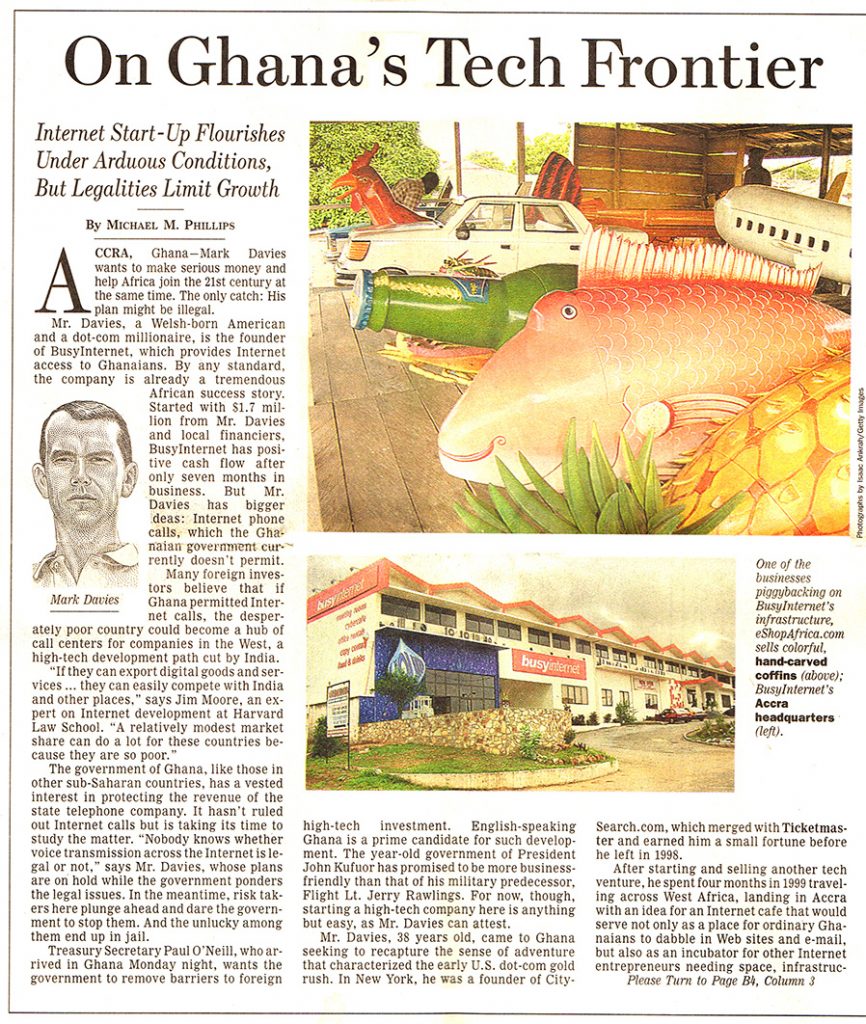 Mr. Davies, a Welsh-born American, is the founder of BusyInternet, which provides Internet access to Ghanaians. By any standard, the company is already a tremendous African success story... [WSJ]

ACCRA, Ghana — Mark Davies wants to make serious money and help Africa join the 21st century at the same time. The only catch: His plan might be illegal.

Mr. Davies, a Welsh-born American, is the founder of BusyInternet, which provides Internet access to Ghanaians. By any standard, the company is already a tremendous African success story. Started with $1.7 million from Mr. Davies and local financiers, BusyInternet has positive cash flow after only seven months in business. But Mr. Davies has bigger ideas: Internet phone calls, which the Ghanaian government currently doesn’t permit.

Many foreign investors believe that if Ghana permitted Internet calls, the desperately poor country could become a hub of call centers for companies in the West, a high-tech development path cut by India. “If they can export digital goods and services … they can easily compete with India and other places,” says Jim Moore, an expert on Internet development at Harvard Law School. “A relatively modest market share can do a lot for these countries because they are so poor.”

The government of Ghana, like those in other sub-Saharan countries, has a vested interest in protecting the revenue of the state telephone company. It hasn’t ruled out Internet calls but is taking its time to study the matter. “Nobody knows whether voice transmission across the Internet is legal or not,” says Mr. Davies, whose plans are on hold while the government ponders the legal issues. In the meantime, risk takers here plunge ahead and dare the government to stop them. And the unlucky among them end up in jail.

Treasury Secretary Paul O’Neill, who arrived in Ghana Monday night, wants the government to remove barriers to foreign high-tech investment. English-speaking Ghana is a prime candidate for such development. The year-old government of President John Kufuor has promised to be more business-friendly than that of his military predecessor, Flight Lt. Jerry Rawlings. For now, though, starting a high-tech company here is anything but easy, as Mr. Davies can attest.

Mr. Davies, 38 years old, came to Ghana seeking to recapture the sense of adventure that characterized the early U.S. dot-com gold rush. In New York, he was a founder of Citysearch.com (http://www.citysearch.com/), which merged with Ticketmaster and earned him a small fortune before he left in 1998. After starting and selling another tech venture, he spent four months in 1999 traveling across West Africa, landing in Accra with an idea for an Internet cafe that would serve not only as a place for ordinary Ghanaians to dabble in Web sites and e-mail, but also as an incubator for other Internet entrepreneurs needing space, infrastructure and moral support.

If Mr. Davies longed for that frontier experience, he picked the right place. He and partner Alex Rousselet, a 45-year-old Frenchman with long experience in the African oil industry, soon discovered they couldn’t take even the simplest things for granted here. Electricity in Accra cuts out at least once a week, so they needed a $30,000 backup generator, and a huge battery to keep the computers up and running for 11 minutes until the generator kicks in. Then there is the $18,000 transformer out back; at times the 240-volt power can surge to 290 volts. The computers require frequent cleaning because of the dust that blows down from the Sahara.

Minutes after Mr. Davies wired $150,000 for the lease on the building, a former gas-bottling plant, an elderly neighbor informed him that it was actually her property and that rights to it were in litigation. After a panicked phone call, he stopped the wire transfer, but it took three weeks to confirm his lease was valid. Customs held his satellite dishes for two months.

Embracing local customs, Mr. Davies arranged for a Ga tribal chief to bless the construction site with a bottle of imported schnapps. But even a tribal blessing can only go so far. Ghana Telecom, the virtual phone monopoly, has still installed only 15 of the 30 lines he ordered. The entire country has just 249,000 phone lines, for a population of 20 million.

Despite the obstacles, BusyInternet caught on. The company employs 50 people, and some 1,500 customers pay roughly $1 an hour to use the Internet each day; additional revenue comes from a copy center, meeting rooms, a restaurant and bar, movies, lectures and rent from start-ups who piggyback on the infrastructure BusyInternet has assembled.

Along the upstairs hall, a pair of Dutch Web site designers wait for Ghanaian companies to awaken to the power of the Internet. A business called eShopAfrica.com (http://eshopafrica.com/acatalog/index.htm) sells Africana online. Products include hand-carved Ga coffins that are shaped like airplanes, shoes and howitzers, all designed to reflect the earthly interests of the recently deceased.

Another business, Data Management International Inc., of Wilmington, Del., employs 37 Ghanaians to process environmental fines for the City of New York. The Ghanaians type in data from computer images of citations handed out to hot-dog vendors caught smoking while serving, homeowners who leave trash on the sidewalk or ice-cream trucks nabbed selling cones in a crosswalk. The fines often far exceed the $72 that the average DMI clerk earns each month.

Messrs. Davies and Rousselet plan to open branches in other African cities. In Accra, they figure they have run into revenue limits surmountable only if the government authorizes them to sell customers Internet phone calls.

At a technology trade fair last week, Mr. Davies met Trevor Dearman, chief operating officer of Denwa Communications Inc., a Fairfax, Va., company that sells voice-over-Internet services. The two started chatting with Alexander Sulzberger, Denwa’s local rep and a BusyInternet tenant. They discussed the possibility of preparing a system that would bill customers on the spot for both Internet use and phone calls. Mr. Dearman, relatively new to Africa, figured the technology is so cheap and simple that everybody should want it. “I don’t know why it’s so clandestine,” he said.

“Because people get locked up for it,” Mr. Sulzberger shot back.

Indeed, everybody knows what happened to Nanayaa T. Owusu-Prempeh, chief executive of Tin-IFA Ghana Ltd., an Internet-service provider across the road from BusyInternet. A couple of years back, Mrs. Owusu-Prempeh was making good money by facilitating the flow of incoming international voice-over-Internet calls into the local phone system, a practice known as call termination.

With 60 Ghana Telecom lines, business representatives estimate a call terminator could clear $15,000 a month. The thought of that lost revenue was apparently too much for the Rawlings government, and in 2000 a police SWAT team swept into Mrs. Owusu-Prempeh’s offices and ripped out her satellite dish, computers, fax machine, tables and everything else. Her entire staff was jailed for three days, and, she says, it took about a year to get her equipment back.

For now, she says, Tin-IFA doesn’t offer call-termination services. But she is ready to start up again should the new government allow it, and she suspects that many others are doing it on the sly. Ghanaian officials say they will decide in their own good time if, when and how to permit voice calls over the Internet. “We don’t want to leap and then say we’ve either leaped too far or leaped far short of our target,” says John S. Achuliwor, deputy minister of communications and technology. He stresses the government’s concern about the impact Internet calls would have on existing phone services, such as Ghana Telecom.

Mr. Achuliwor also warns that violators could see their equipment seized. Mr. Davies isn’t about to risk that, but others aren’t so shy. At the end of the upstairs hall at BusyInternet is the local office of Rising Data Solutions, a Gaithersburg, Md., company with big plans for Ghana. Rising Data is negotiating a contract with a doctors’ answering-service company that wants a low-price overseas center to handle calls from U.S. patients.

In the next few months, says Kwame M. Bonsu, vice president for operations, Rising Data will open a 100-employee operation where, 175,000 times a month, Ghanaian operators will pick up the phone and answer: “Dr. So-and-So’s office. Can I help you?”

A 20-year International Business Machines veteran who has traded in his white button-down for the colorful African print shirt of his homeland, Mr. Bonsu is betting that the government won’t dare raid such a large employer. “Let me put it this way: We don’t think it’s going to stop us from going ahead,” he says