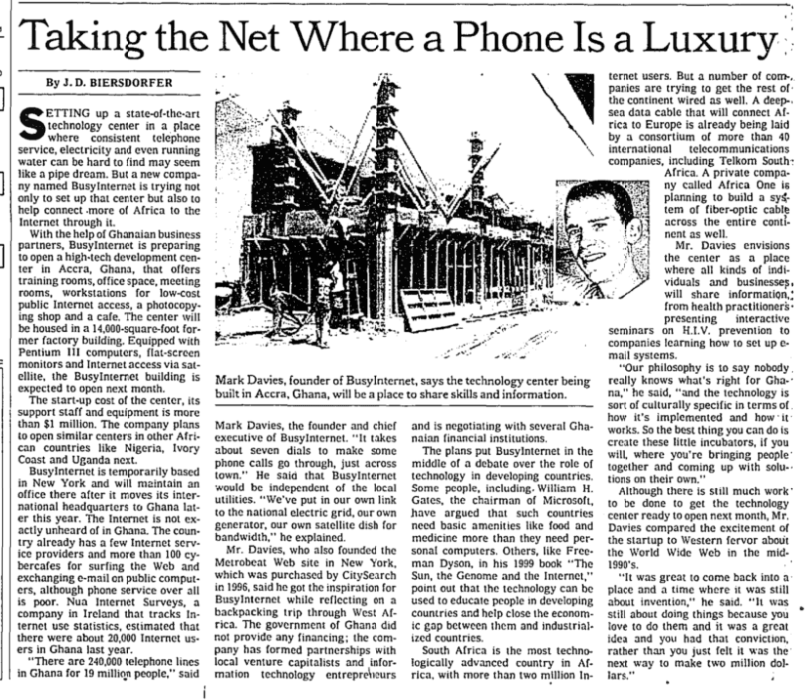 Taking the Net Where the Phone Is a Luxury

Our philosophy is to say nobody really knows what's right for Ghana... the best thing you can do is create these little incubators where you're bringing people together and coming up with solutions on their own [NYTIMES]

SETTING up a state-of-the-art technology center in a place where consistent telephone service, electricity and even running water can be hard to find may seem like a pipe dream. But a new company named BusyInternet is trying not only to set up that center but also to help connect more of Africa to the Internet through it.

With the help of Ghanaian business partners, BusyInternet is preparing to open a high-tech development center in Accra, Ghana, that offers training rooms, office space, meeting rooms, workstations for low-cost public Internet access, a photocopying shop and a cafe. The center will be housed in a 14,000-square-foot former factory building. Equipped with Pentium III computers, flat-screen monitors and Internet access via satellite, the BusyInternet building is expected to open next month.

The start-up cost of the center, its support staff and equipment is more than $1 million. The company plans to open similar centers in other African countries like Nigeria, Ivory Coast and Uganda next.

BusyInternet is temporarily based in New York and will maintain an office there after it moves its international headquarters to Ghana later this year. The Internet is not exactly unheard of in Ghana. The country already has a few Internet service providers and more than 100 cybercafes for surfing the Web and exchanging e-mail on public computers, although phone service over all is poor. Nua Internet Surveys, a company in Ireland that tracks Internet use statistics, estimated that there were about 20,000 Internet users in Ghana last year.

“There are 240,000 telephone lines in Ghana for 19 million people,” said Mark Davies, the founder and chief executive of BusyInternet. “It takes about seven dials to make some phone calls go through, just across town.” He said that BusyInternet would be independent of the local utilities. “We’ve put in our own link to the national electric grid, our own generator, our own satellite dish for bandwidth,” he explained.

Mr. Davies, who also founded the Metrobeat Web site in New York, which was purchased by CitySearch in 1996, said he got the inspiration for BusyInternet while reflecting on a backpacking trip through West Africa. The government of Ghana did not provide any financing; the company has formed partnerships with local venture capitalists and information technology entrepreneurs and is negotiating with several Ghanaian financial institutions.

The plans put BusyInternet in the middle of a debate over the role of technology in developing countries. Some people, including William H. Gates, the chairman of Microsoft, have argued that such countries need basic amenities like food and medicine more than they need personal computers. Others, like Freeman Dyson, in his 1999 book “The Sun, the Genome and the Internet,” point out that the technology can be used to educate people in developing countries and help close the economic gap between them and industrialized countries.

South Africa is the most technologically advanced country in Africa, with more than two million Internet users. But a number of companies are trying to get the rest of the continent wired as well. A deep- sea data cable that will connect Africa to Europe is already being laid by a consortium of more than 40 international telecommunications companies, including Telkom South Africa. A private company called Africa One is planning to build a system of fiber-optic cable across the entire continent as well.

Mr. Davies envisions the center as a place where all kinds of individuals and businesses will share information, from health practitioners presenting interactive seminars on H.I.V. prevention to companies learning how to set up e- mail systems.

“Our philosophy is to say nobody really knows what’s right for Ghana,” he said, “and the technology is sort of culturally specific in terms of how it’s implemented and how it works. So the best thing you can do is create these little incubators, if you will, where you’re bringing people together and coming up with solutions on their own.”

Although there is still much work to be done to get the technology center ready to open next month, Mr. Davies compared the excitement of the startup to Western fervor about the World Wide Web in the mid- 1990’s.

“It was great to come back into a place and a time where it was still about invention,” he said. “It was still about doing things because you love to do them and it was a great idea and you had that conviction, rather than you just felt it was the next way to make two million dollars.”